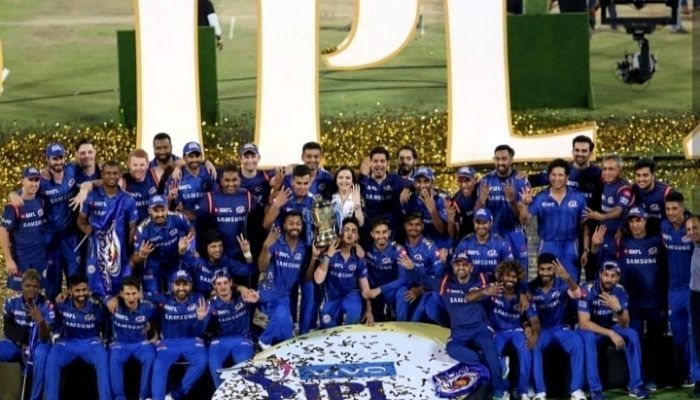 Mumbai Indians, the defending champions and the 4-time champions of the Indian Premier League, have managed to maintain the supreme core that has worked so well for them over the years. Going into the auction, they had released 10 players. However, the familiar names of MI will once again don the blue jersey. Let’s take a look at the best XI for the champions for IPL 2020.

Last year, Mumbai had the opening combination of the skipper Rohit Sharma and Quinton de Kock. While Rohit didn’t have the best of time throughout the tournament, de Kock flourished in his own classy manner. From the auction, MI had an absolute steal when they bagged the Australian superstar Chris Lynn for his base price of INR 2 crore.

Lynn is a renowned opening batsman. But the team management might want to stick with the left-hand, right-hand combination at the top. Given Rohit is set to open, de Kock might accompany him as he gets an edge being a wicketkeeper as well. But Lynn is too good to be left out, especially at the Wankhede Stadium where he would enjoy the ball coming onto the bat. He has batted at No.3 for his Big Bash franchise Brisbane Heat at times. So, the possibility of Lynn batting at No.3 for MI can’t be ruled out.

Fireworks at the death

The firepower is fierce with Rohit, de Kock and Lynn at the top. However, there is plenty in the store still to follow. Suryakumar Yadav has been superb for the team in the last few years in the middle order. He has been blistering in the domestic T20 competition as well. After Yadav, follows the big man from the Caribbean – Kieron Pollard. The association of Pollard with Mumbai goes way back and the all-rounder, with his credentials with bat and ball, has won numerous matches for the franchise.

Mumbai Indians are blessed with the Pandya brothers batting in the lower middle order. While Krunal can play the dual role of holding the innings as well as the power-hitter, Hardik can tear apart the opposition at the death overs. That’s not all with the brothers. Both are equally capable of bowling 4 overs regularly and are proven wicket-takers.

A handful of bowlers

The top 7 spots have been occupied which leaves the space for 4 proper bowlers. In the shortest format, it’s always handy to have the extra cushion with the ball in case one of the bowlers is having an off day. With the Pandya brothers, Mumbai already has at least 6 overs in the bag. They have picked up Dhawal Kulkarni from the auction who knows a thing or two about the Wankhede track. He was a prominent member of the Rajasthan Royals for long. The experience of the pacer would be crucial for the team on his home ground.

Rahul Chahar would most likely be the lead spinner in the XI. The leg-spinner had done a brilliant job in the last edition. Jasprit Bumrah is a certainty. There is no one who can match the skills he possesses for the format. There is one spot remaining now for the third pacer. With one overseas spot still to go, there are several options in the squad.

The veteran Lasith Malinga has been instrumental in MI’s success for a long time. There is the Kiwi pacer Mitchell McClenaghan who has won a few games for them. From the auction, MI roped in Nathan Coulter-Nile who is a brilliant bowler at the death. But the new addition to the squad Trent Boult might get a nod ahead of others. He is magnificent with the new ball and the Wankhede always has some assistance for the seamers.

Mumbai Indians have relied on the core group of players to bring them success. They have delivered more often than not. There are plenty of other talented players waiting in the wings. But this has to be the strongest possible XI. However, there is another possibility if the team wants to go in with 2 overseas seamers. In that case, either of Quinton de Kock or Chris Lynn would miss out. Ishan Kishan might get picked as the wicketkeeper in that scenario.

But for the starters, they might want to go in with both Lynn and de Kock as there is enough strength in the bowling department. This XI looks well balanced in all 3 departments. By the looks of it, the other teams are going to have a tough time against the reigning champions. Rohit Sharma & Co. definitely have the arsenal to go the distance for the fourth time.