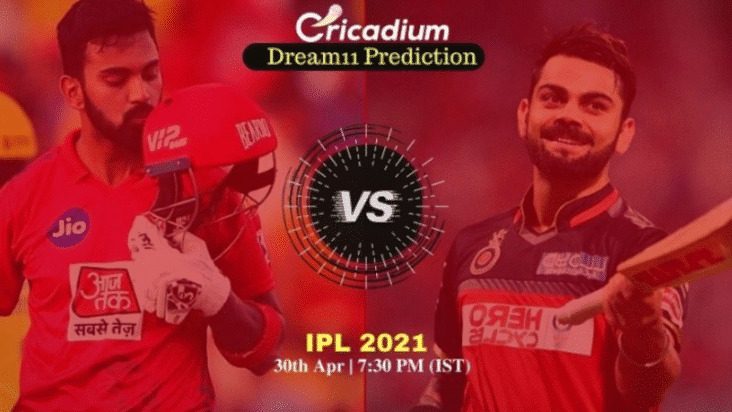 It’s been a dream run so far for Royal Challengers Bangalore. They won their first four matches on the trot. Chennai Super Kings then defeated Virat Kohli’s team to end the winning streak. But RCB once again got back to the winning path by beating Delhi Capitals. They are on the second spot on the points table with 10 points from 6 matches.

Punjab Kings have once again struggled. They managed to win their first game of the season. But post that, the franchise lost three games in a row. The victory against Mumbai Indians did instill some confidence. But the one-sided defeat against Kolkata Knight Riders once again raised a question mark.

Let’s find out the PBKS vs RCB Dream 11 Prediction for today’s IPL 2021 match 26. Which will help you to make the perfect dream11 team for today’s match.

AB de Villiers showed everyone how to bat on a difficult pitch of Ahmedabad. If the top order doesn’t contribute much, AB is the savior for RCB. Punjab Kings need KL Rahul to do well in almost every game. Such is the dependency on the skipper.

Two brilliant and eye-catching wicketkeeper-batsmen are taking part in this game. Both KL Rahul and AB de Villiers are worthy of being picked because of their form this season.

Deepak Hooda has proved to be the pacemaker for Punjab this season at the fag end of the innings. Even though Washington Sundar hasn’t had a great time in the league so far, yet he is a decent all-rounder who gives a few points every now and then.

Chris Gayle and Mayank Agarwal are the batsmen to go for from the Punjab Kings line-up. These two have had a decent season so far. Glenn Maxwell and Devdutt Padikkal would be the suggested picks amongst the RCB batsmen. Both have had their moments in the league.

Mohammed Shami is the best bowler in the Punjab unit. He picks up the crucial wickets and hurries the batsmen with his skiddy nature. Harshal Patel is unmissable because he is bagging heaps of wickets in every match. Kyle Jamieson is also a safe option from RCB to select.